Most people who restore old bikes, do so for reasons of nostalgia. They either had that particular model in their youth, or maybe wanted one and never got it. Sometimes it was their dad's or grandad's bike. In the case of my Viking Severn Valley, it was the first. I was 16 and in the market for a new frame and for some time I'd had my eye on a red Cinelli hanging in  Fred Williams' shop in Wolverhampton, the nearest large town to where I grew up.

After I had saved up the money, I cycled my old bike up to the shop and tried to part exchange it for the Cinelli. I had removed all the good components and substituted the worn-out old ones. Fred was not impressed with my bike so I declined his low offer and decided to make a cash deal for my Italian dream frame. Problem was, Fred didn't want to sell me the frame and put all of his sales skills into selling me a "nearly new" Viking Severn Valley he had in the back of the shop. The story was it had been built up for a show (the CTC York Rally), but never ridden. Fred had bought it off Viking after the show. The probable truth was that Fred had stripped it for parts and was now trying to dispose of the frame to this first mug that walked into the shop (me!). However the Severn Valley was undoubtedly a better frame than the Cinelli: Reynolds 531 double butted throughout with Nervex lugs and by the time the bike was built up I was very pleased with the bike. The sale of my old bike financed the purchase of some new parts for the SV.

I used it for everything: riding to school, racing, time trials, day rides and even a tour to North Wales, but I soon became more interested in girls than bikes and you can't carry your girlfriend on the back of a racing bike, so it was sold to finance the purchase of a Vespa!

Having resumed cycling a few years later after finishing Uni, I owned quite a few bikes over the years, but started hankering after another Severn Valley. After a couple of years, I found one on eBay, won the auction and just before I was going to collect it from Devon, the seller contacted me and let me know that his son had reversed his 4-wheel-drive over the frame in the garage! I managed to find a Viking Hosteller as a substitute and painted it up in the same colour scheme as my old Severn Valley. It was a great bike but was way too small for me and I couldn't get comfy on it, so I sold it on to a shorter friend of mine.

My search for a Severn Valley proved fruitless, until I bought some rims from a seller on the CTC forum and whilst I was talking to him about bikes in general, he revealed he had a Severn Valley frame in his loft and if I called back in a week or so he would get it down for me. The story was he got it off an 80 year old, who was planning to restore it to Viking team spec. The seller threw in a suitable frame for my son's fixie project and the deal was done. There was hardly any paint left on it, burnt off by brazing work - the often-flattened rear brake bridge had been replaced and bottle cage bosses had been fitted.

My rule, which has often served me well, is to build up and ride the bike, before any paintwork is done, in case any "engineering work" needs to be done and more importantly to find out whether I like the bike! This one was too bad to ride with no paint, so I threw it in with a batch of black powder coating I was getting done. Sprayed a white contrasting panel with an aerosol can and applied the correct transfers and a repro head badge given to me by the previous owner, the original having been lost (or flogged off!). It did look quite smart for very little outlay. I built the bike up with spare parts I had lying around and started to ride it regularly. I found my fond memories were correct and it was a lovely ride. I decided to build it up with the parts I would like to have had, but couldn't afford back in my teens. It took me a year and more than £800 to accumulate the Campagnolo hubs, derailleurs, crankset and bar end shifters, that were "top-end" back in the day. I used it for a circuit of the Isle of Wight and realised the racing gearing was too high for me. 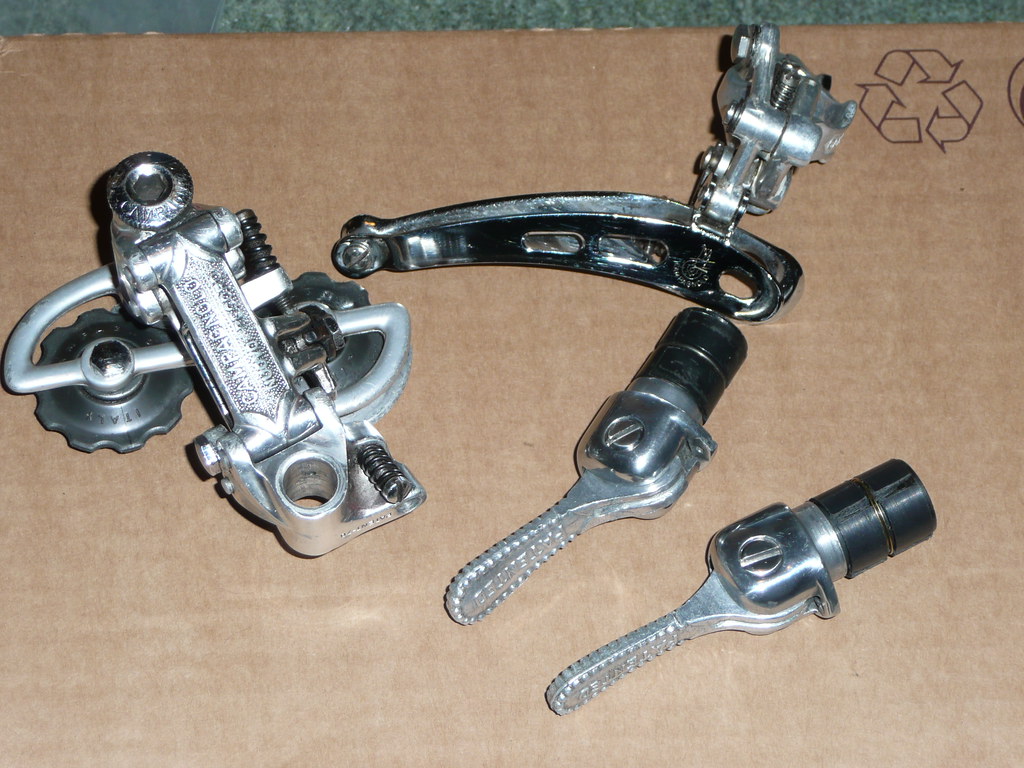 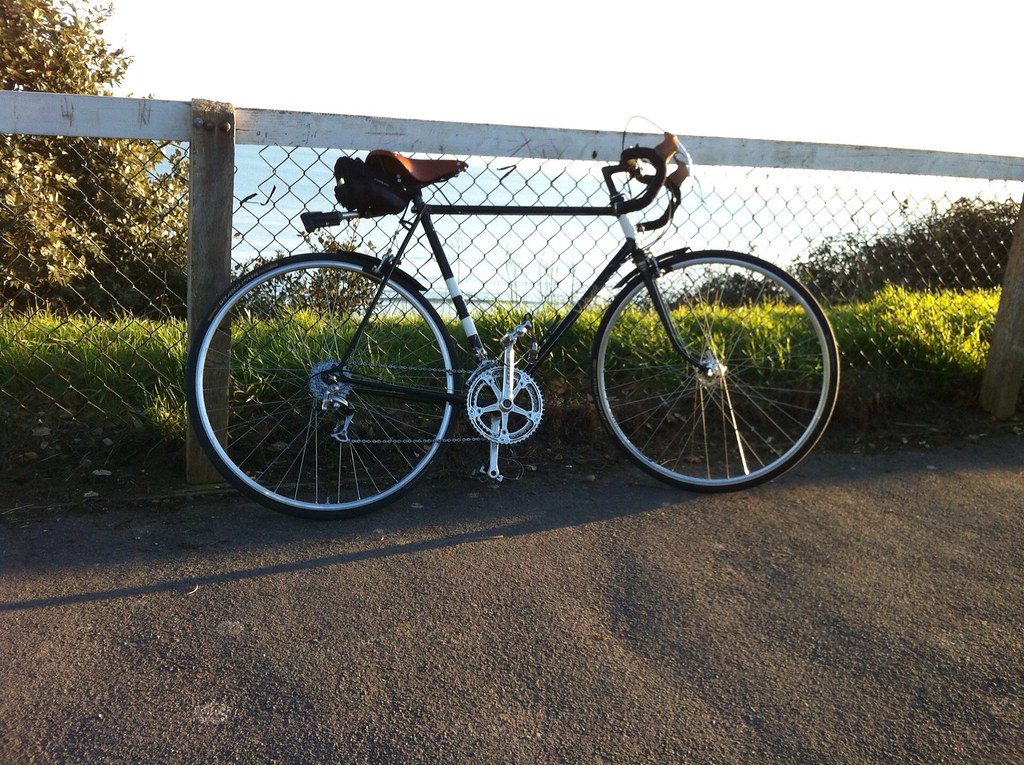 But my aim when I bought it was to use it for a tour of the the Severn Valley (the race the frame was named after), so I sent it off for a respray in the Post Office red  team colours of my original Severn Valley. I also asked for the buckled seat stays to be straightened. Either it had been in an accident at some time or someone was trying to create a curly Hetchins replica. I also got the rear end widened to 130mm in case I wanted to fit a later hub. The frame builder did a great job and also researched the correct colour scheme and transfers for the team bikes of the year of manufacturer. The problem was the repaint took much longer than anticipated and I had to use another bike for the Severn Valley tour, but Eroica Britannia beckoned. 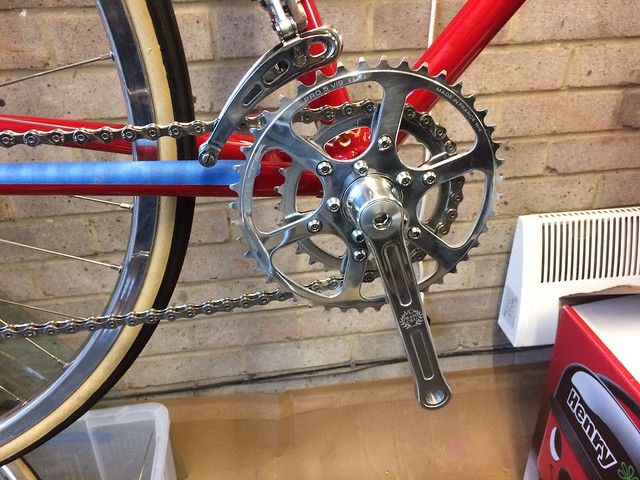 and the wheels were rebuilt with 700C Velo Orange Paris-Brest-Paris rims, which look just like the Fiamme sprint rims I had fitted back in the day. Grand Bois 26mm tyres completed the build. Brakes are long-reach Mafac Racers, made back in the times when we rode 27 x 1/1/4" wheels for training and 700C sprints and tubs for racing.